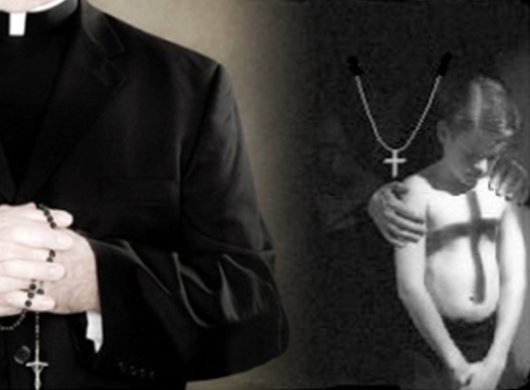 For more than 35 years my ministry has been denouncing this type of misconduct within the Catholic Church – with headquarters in Vatican City – and that such institution is the beastly system that has overtaken the whole world since the fall of Adam, as foretold in Daniel 8. There is no other religious system in history than matches so conclusively the description given to the beast of Daniel than Rome . Let us now, that there is this Catholic institutional debacle, review the particular traits. Daniel the prophet mentioned about this satanic power.

It is true that all men are weak in the flesh, for the Scripture clearly states so that all men are sinners; however, where Christ is the Spirit is also (2 Corinthians 3:17), and where the Spirit is there are plentiful fruits of the Spirit being manifested by the believer. Let us read what Paul wrote in the name of God, “But the fruit of the Spirit is love, joy, peace, longsuffering, gentleness, goodness, faith, meeleness , temperance; against such things there is no law”.

Therefore, I, son of God and Prophet of the Final Days, hereby declare this: The pedophilical homosexuality among the Roman Catholic clergymen is a indubitably clear example that they are not from Christ. Christ does not and has never dwelt in the Roman Catholic Church.

Dear readers, remember the murky history that has characterized Rome – but of course, “the worse case of blindness is of the one who having eyes refuse to see”.

The following statements are a re-edition of an article I wrote titled: “A biblical analysis of the Pope Figure”. Let us introduce you to the greatest biblical prophecy in Scripture: the prophecy about the fourth beast of Daniel chapter seven.

If we really want to discover which power is represented by the beast of Daniel 7:7 represents, it is necessary to distinguish those characteristics the Bible identifies about this power, in order to identify which power in history gathers such description. Let us now review these characteristics given by Daniel and Paul and John the seer of Pathmus are the following:

1) It shall subdue three kings to achieve absolute power (Dan. 7:24)

The Pope is clearly identified here: History records the fall of the heruls , the Vandals and the Osthrogoths , who opposed the election of the bishop of Rome as Holy Father.

Dear friend, there is no doubt on the fulfillment of this statement. History is our best ally, so no one can deny the Roman Pope is here also alluded. The holy wars, the killings and the inquisition were among the instruments of terror been used by this religions power.

It is clear: Daniel is making reference to God’s laws, because human laws are always susceptible to changes. We have identified the only power in history that claims to have enough authority as to after the law of God: Rome with the Pope as its absolute ruler. Anthiochus Epiphanes , whom the Catholic Church claims to be the fourth beast of Daniel 7:7, does not fit this biblical description, for he has never stepped in with the law of God. Antiochus was a king who belonged to the third beast of Daniel 7:6, which represents the Greek Empire, which was divided into four kingdoms (as written in the prophecy about the four heads). Antiochus was a descendant of Seleuch , one of the four generals who benefitted of the division of the kingdom after the death of Alexander the Great. Then, if Antiochus is part of the third beast, how can he be part of the fourth beast which was diverse from all beast that preceded it? The religious aspect makes it diverse from all the others, as the prophecy declares. Without a doubt, this aspect of Daniel 7:25 is a clear and indubitable reference to the Pope, and not to any other political power.

4) And through his policy also shall cause craft to prosper in his hand (Daniel 8:25)

Popes have been skillfully clever in their quest for absolute power and recognition throughout history. But, how is it possible that deceit could prosper so much in his hand is such a way that “…all the world wondered after the beast?” (Revelation 13:3).

It is very simple to ratify this statement. The bishop of Rome really thinks he is holy, even when he is aware that this belief is contrary to the Most High, who through the word of the apostle says: “As it is written, There is none righteous, no, not one”. “For all have sinned, and come short of the glory of God; Being justified freely by his grace…” (Romans 3:10, 23-24). The Pope allow people to kneel before him and kiss his ring, contrary to Peter (the so called first Pope) who did not encourage such act (see Acts 10:25-26).

Peace has been a constant proverb of the Pope, but he does not preach the peace of me gospel, he rather preaches the passing and ephimeral peace of this world in chaos, as we previously stated. The Pope is the only one who indubitably fits this description. History also records the many persecutions unleashed by this evil provoking others to fight on his behalf. Daniel said that his power shall be mighty, but not by his own power (8:24) ¿Is it not clear?

The apostle Paul brings about an astoundingly clear description in regards to this character: “Who opposeth and exalteth himself above all that is called God, or that is worshipped; so that he as God sitteth in the temple of God, shewing himself that he is God” (2 Thessalonians 2:4).

The Antichrist’s form of opposition is not through overt action, but rather through a more subtle manner, with cunning craftiness, for his true intention is to be like God. The word “antichrist” gives us the idea of a pretension to supplant the Christ, not to work on God’s behalf but to distort it through hidden tactics. This is the way and style of Satan and his ministers, as the apostle says: “And no marvel; for Satan himself is transformed into an angel of light. Therefore it is no great thing if his ministers also be transformed as the ministers of righteousness; whose end shall be according to their works” (2 Corinthians 11:14-15).

But their doom will continue: The Roman Catholic Church has reach its “point of no-return”. And I, in the name of God my Father, I hereby declare to the Catholic officials in Boston, the Vatican and around the world, that you are working in vain to vindicate your image, for Rome is an indivisible and not a sectioned institution. Or, are you not the ones who claim that the Protestant world is sectioned into multiple sects and that you are the ones who are the only indivisible integrated institution in the world? Why are you now pretending to blame only Boston for your crisis, as to even saying that this the American culture’s fault, when history bears witness that Rome have been plagued with a high rate of homosexuality from long time ago. It is God who has determined to judge you! For many years this voice of mine has been foretelling this critical situation of yours – therefore, do not pretend, as it is called in baseball, to “hide the ball” for we have clearly “seen your stitches”, and it is about time for the people to finally know who you are: Members of the beast of Daniel 7 and 8.

But, there is me more thing to say about your case, Rome:

How can it be possible for your, dear readers, to not see what is going on in these days, on regards to the scandalous cases of pederast, the fulfilment of this characteristical trait? Notice, dear readers, a clear evidence of the use of this characteristic by part of the Roman Cleric: The use of sophisticated and difficult language in order to not be understood. This is a clear evidence of their lack of will to allow themselves be un derstood by the people – but they pretend this way to be seemed as “intellectuals” and “wise”, “those who speak like angels”. But, no way! You are just a bunch of arrogants who refuse to speak the common language of the people – “ vox populi ” – to avoid to confront your true reality in the sight of the laymen. Hear this word: pedophilia. A layperson must stop reading and look for a dictionary in order to find out what it mean, and be able to understand. The poor reader, tired of this, begins to lose interest and due to his frustration he stay out of a true way of communication. And, why not say the truth? You say, “pedophilia, pedophilia”… no way! Homosexuality! Filthiness! Child abuse! That is what is truly is!

In these days, this evil power carefully selects words to simulate their filthy and blatant sodomy. But “Even if the monkey wears new garments is still a monkey”. Oh, bunch of pigs! How ironic can the pretensions of these evil men can be! You even dare to call yourselves. “Vicars of Christ!” But you are abominable and filthy before the eyes of our Lord Jesus. How daring and pretensions can these men be!

Let me clearly point out this to you, dear Catholic readers, who may consider my words as harsh and not suitable to the Lord of Heaven. (This excuse is commonly used to deviate the attention from the real issues – and that is the way they always do). My brother Jesus was so straight – forward in his words that He even called the Money-Changers of the Temple “thieves!” (not kleptomaniac brothers), and the Pharisees “hypocrites!” (not talented actors) and “white-washed tombs full of rotten bones!” (not elegant people of good taste). In much the same manner, Paul the apostle used to call the Cretans “worshippers of the belly” (not spiritualized and fine people).

Likewise, our brother Martin Luther who without a doubt is the second angel of Revelations 14 (Paul the apostle is the first angel) – spoke, as clearly evidenced through the letter he sent to Pope Leo X (the Pope of his days). Let us read part of such letter:

“My model is Christ: He never hesitated to call His enemies ‘generation of vipers’, ‘hypocrites’, ‘blind guides’, ‘sons of Satan’. Even Paul the apostle called the magician ‘a son of the devil’, ‘cheater’ and ‘evil’; and the false apostles of his days ‘dogs’, ‘deceivers’, and ‘distorter of truth’. What if your fragile ears ever hear such insults? Then you will be compelled to admit without a doubt that no man has ever been more wrathful and violent than Paul the apostle. But, can anyone be considered more severe than the prophets? If seems that delicate ears of these days are always seduced by the harmful praise of hypocrites, who are always complaining if they are not all the time, accusing others of being wrathful. However, those are the same who refuse to confront the truth, evading it with every sort of excuses – they accuse others of being hostile, aggressive and haughty”. (Extracted and translated from the book titled: Anthologies of Martin Luther).

Therefore, if I call you “pigs” I am being truthful and considerate – for a pig is one who rather call human fecal matter “brotherly love”. I hereby declare this again: Rome enthronizes corruption.

A False Coming Prophesied (Mathew 24 and the Secret Rapture)

The Real Facts on regards to the Final Prophetic Call

In Depth: Interview with Luiko of Jesus

Towards a Better Life

The Reason why we have changed our name