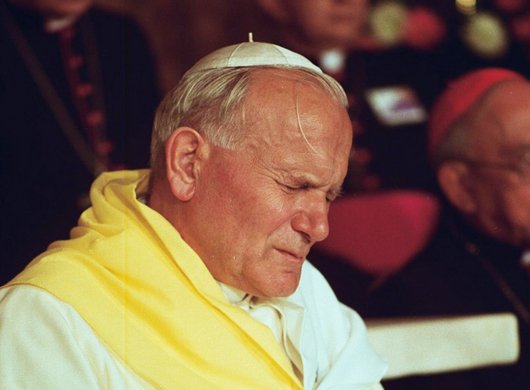 We, united with a same attitude, must carefully evaluate this pretentious gesture that through mere formality pretends to hide their satanic scheme, for they intend to find its way back as the absolute religious power it used to be throughout history, as written on Revelations 13.

For Rome knows that their murky history has undermined their moral solvency to such an extent that even shakes their main foundations. Now, they pretend to erase their setback with just a “Mea Culpa” (“I am guilty’). In the midst of their own mishap, which is the result of their grim historical reality, the only thing Rome can actually do is to confront their horrid reality. Therefore, they pretend to submit themselves at the expense of the forgiveness of today’s Christianity, to later proclaim herself as “Queen”, as it is written on Revelations chapter 18 verse 7. However, what Heaven has deliberated for Rome in Revelations 18:7 is its unavoidable final verdict. As a matter of fact, the people should not waste this opportunity to do what God’s government has declared, “Pay her back even as she paid, and give back to her double according to her deeds; in the cup which she has mixed, mix twice as much for her” (Revelations 18:6). Now, the time to obey God has come! The Inspiration continues, “For this reason in one day her plagues will come, pestilence and mourning and famine, and she will be burned up with fire; for the Lord God who judges her is strong”.

Repeatedly I, this your servant, has declared, and here for the umpteenth time I say again, the great truth of who I am: That I have been sent by God as the last of two Chairs, who were chosen by the Father to fulfill the holy teaching of the salvation which is by faith. This is an extremely important moment when I will give evidence to the whole world of who I really am. I have been called to challenge Rome, who are enemies of God’s truth; to defy the Papal System, which has never been established nor approved by God; and above all, to clear up and enlighten the way to salvation, which was set up by my Eldest Brother Jesus the Christ about 2,000 years ago. Like a folk saying says, “Let your walking do the talking”, and I have told you before hand who I am, this writing is an irrefutable proof of my biblio-theological knowledge, of my interpretative capability, and of my steadfast determination to confront the enemy. Everyone will eventually acknowledge that Rome will never be able to mislead me, and even more, that there is one who is capable of defying Rome successfully (theologically speaking) …and that one is me, Son of God and Lesser Brother of the Lord Jesus Christ, who exercises his full rights on behalf of Our Heavenly House, that is, in the name of Our Father the Lord of Hosts.

This is a matter or substance rather than form. The Scriptures declare that God seeks true worshipers who worship Him in truth and spirit, not for form’s sake or mere appearances (Read John 4:24). The Word continues to say as follows,“And indeed, all who desire to live godly in Christ Jesus will be persecuted” (2 Timothy 3:12). It does not read, “…all who desire to live godly in Christ shall persecute”, but instead, “will be persecuted”, but instead, Catholic failures throughout history are not simple human mistakes but rather unequivocal signs of demonology and evidence of the great chasm fixed between Rome and Jesus of Nazareth. My Eldest Brother Jesus never persecuted anyone, nor took advantage of anyone, he did not even devised to kill anyone! The justice of Jesus was always like pure clear waters from a peaceful haven, and who ever is touched bu these waters will have plenty of peace, happiness and harmony. Isaiah the prophet spoke in regards to the true believer, “If only you had paid attention to My commandments! Then your well-being would have been like a river, and your righteousness like the waves of the sea” (Isaiah 48:18).

The word “apostasy” means “to renounce or abandon the truth”. The Roman Catholic system did abandoned the truth and renounced the Christ! They rather devoted themselves to defy God instead of praising Him. Rome’s haughtiness and their strong proneness to impose their concepts have been well documented throughout history. Notice how drastic is the difference between Christ’s ideas and Rome’s. Notice the way Paul the apostle, speaking in the name of Jesus, exhorts vs implicitly to examine the Word of God by our selves the way it used to be done by the Bereans, who Paul himself called “noble-minded” for they examined the Scriptures to see whether these things were so (Acts 17:10-11). In other words, the Bible, and in particular Christ, exhorts us to search the Holy Writings even when we need the assistance of a true interpreter; no matter how you see it, he who searches the truth is “noble-minded”. Meanwhile, Rome sentenced to death the holy ones (mens of faith) for the only reason that they examined the Scriptures-and this is well-documented history! It is clear the fact that Rome opposes any analysis of the Holy Word, and by doing this they contradict the Almighty Himself. In the prophecy of Daniel chapter 8 verse 12 it is explained the reason why God delivered His people into the hands of the Abomination of Desolation. It is simple: The people forsook the truth, fell into apostasy; and as a result of their sin, they were held captive. If a people or institution decides to remain in good-standing with the Teacher, then they must follow Him, obey Him and must prove faithful to Him; otherwise, God allows them to be held captive and enslaved Rome constantly betrayed and trampled down the truth throughout their shameful history. It’s quite late for a non-convincing apology for their past errors. The bottom line is: As for me, the so-called “Mea Culpa” recently proclaimed by Pope John Paul II is an astounding ridicule!

Rome has only One Option

Roman Catholicism has only one option in order to receive forgiveness by God, which we describe in the following two steps:

Step One: Abandon that traditional spirit which is well-known within the Catholic circle. How can this be done? By acknowledging that their theology is wrong, not only their “human errors”. To admit that they trampled down the truth.

Step Two: Shout loud that from now on they will fully depend of the humble Teacher of Galilee bu accepting the objective and historical gospel, and that they will blot out all traces of pagan and mystical influence from all their doctrines.

The Catholic institution is submerged within a materialistic emphasis and its goal is worldly, which is contrary to Christ’s Institution, that is, the Apostolic Church. Now, the Catholic leadership pretends to amend this present society; while on the other hand, Christ and his apostles used to lead everyone towards a glorious future of heavenly standards. Rome has never paid attention to the approaching New Kingdom, for they are a worldly power headed by a king of this age, say, the Pope. Rome has no intention to advance the New Kingdom the way it was done by Christ, who said “My kingdom is not of this world”. But Rome insists to declare that the Church’s mission is to better this present world. Therefore, the Catholic Church becomes a major obstacle for God’s purpose; and I say more, Catholicism has been the worst hindrance God has ever had to deal with in this evil age.

To speak of the Institutional Roman Catholicism is to speak of this evil and corrupt present age. On the other hand, to speak of the Church of the New Testament is to speak of the near-coming New Eon, which will bring peace and happiness to all its citizens. Therefore, you must take your stand and decide on whose side you are struggling for: Whether you shake hands with Rome and this evil age, or you will come out from this worldly state and shake hands with Jesus and the future. Everyone must clearly understand this bottom line: The Roman Catholic institution is totally opposite to God’s purpose, and that the Lord will never sponsor such evil organization. Christ has no harmony with Roman Catholicism. The Lord Jesus has only proposed Himself to uncover who truly rules this world, and at the end of these final days He will reveal His absolute and total dominion over these lower earthly realms. Success already belongs to the Lord Jesus. This struggle cannot be detained.

According to the Pope’s latest speeches, the sins he is apologizing for are ones committed by some members of the Curia calling them “personal sins”. How dare he! After so many centuries past, now he intends to mislead the world by considering the sins of his predecessors as isolated or personal sins of men who do not represent the Catholic spirit. Can there be a greater example of shamelessness? That this senile man pretends to fool the whole world after the very-well known fact that the so-called Holy Inquisition was an invention of the Catholic institution with the approval of the Pope of that time, “Innocent” the Third and a “staff of followers who favored Rome’s institutional policy. How can it be possible to pretend to isolate this problem as of “one individual” when such individual happens to be the highest authority of the Catholic System, as it is the case of “Innocent” the Third? Rome is integrated by throngs of men who denigrate the Christian faith. Now comes Mr. John Paul the Second apologizing for that which is unforgivable. They have long ago committed the unforgivable sin, that is, to not listen the voice of the Lord and Christ. The so-called Pope’s apology is really a foolish maneuver of ravenous wolves who believe they can deceive the Lord of Heavens and everyone in this planet. Soon, very soon the Lord’s justice will be manifested!

They have no other choice but to conform themselves to their unavoidable destiny: To bite the dust of their certain and unavoidable defeat. Let me remind you this: Soon I will be taken up into heaven to be totally restored with youth and then return to confront you, and this is a promise. There is one big problem coming after you and that is me, Luis J. Laborde, who is also known as the Prophet for the Year 2,000, who is also Brother of Jesus the Christ and the last Chair of the history of this world and the son of the Father, the Holy One of Israel.

Rome : The Greatest Money-Changers of History

The Gospel: God’s Goodness and Glory

The God’s Power of Realization for The Vindication of Luiko of...