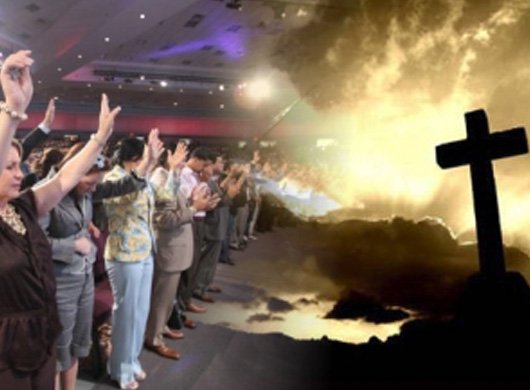 The spirit that lurks within Pentecostal circles is known for making people fall dawn backwards needing catchers—to the extent of even braking arms—which is a clear manifestation of violence that brings disorder instead of peace.

Pentecostalism does not preach the Eternal Gospel of our Lord Jesus Christ. When we speak of a legitimate prophetic call we must link it to the truth of the gospel, for apart of the gospel no gift makes sense.  Prophetism exists because the gospel exists.  If we read the Epistle to the Romans chapter one starting from verse one the Divine Inspiration tells us;“Paul, a bondservant of Jesus Christ, called to be an apostle, separated to the gospel of God which He promised before through His prophets in the Holy Scriptures, concerning His Son Jesus Christ our Lord, who was born of the seed of David according to the flesh, and declared to be the Son of God with power according to the Spirit of holiness, by the resurrection from the dead. (Romans 1:1-4).

Here there is a fact: the apostolic call was made for the preaching of the gospel, and all ministerial gifts have been created with that same basic purpose; therefore, no ministerial gift is legitimate if it is not in accordance with that fundamental purpose, that is, to preach the gospel, which is the basic foundation for every secondary doctrine.  The question here is what is the gospel as to be so important that God established it the foundation of the whole theological structure?  This is a crucial question to be made in order to be able to identify the true legitimate ministry and, at the same time, uncover and refute the false ministry.  In other words, whoever pretends to declare himself as a minister of God must first prove to know the gospel.  If he does not pass this test but still pretends to continue preaches, the such does not speak in the name of God, for the simple reason that; “For no other foundation can anyone lay than that which is laid, which is Jesus Christ” (1 Corinthians 3:11).

In other articles I explain that the gospel is everything related to the acts of God in Christ, which are objective and occurs apart from the believer.  These acts took place in history and, as the apostle Paul also declares in the epistle to the Romans, the evangelical protagonist of excellence is the Lord Jesus Christ.  The Lord Jesus is an individual who is apart from any believer; therefore, when we speak of the gospel we are speaking of something which occurred in someone else and not within your or in my person as believers.  The only thing that happens in us, as believer, is just a change of attitude that comes as a result of the fact that Jesus paid for our sins through His vicar sacrifice about 2,000 years ago, but my change of attitude or conduct does not, by any means, get for me the benefit of being counted as a saved one.  It is the ransom paid by Christ dying for me—in my place—that saves me.  Thus says the apostle Paul,“…that Christ died for our sins according to the Scriptures, (1 Corinthians 15:3).  Notice how Paul declares these words within the context of the gospel, “Moreover, brethren, I declare to you the gospel which I preached to you” (1 Corinthians 15:1).  The Acts of Christ in history are we define as the gospel.  It is the gospel the cause of my justification or acceptance by part of God.  Our change of attitude as a result of hearing this revelation is defined as the sanctifying aspect of redemption.  This sanctifying aspect is channeled by the Holy Spirit of God and Christ. The sanctification is a reality in every true Christian’s life but it must be clear that the only and exclusive cause of our salvation is the justifying gospel.

Now, after understanding this reality, let us consider the words of the apostle Paul in his epistle to the Galatians on chapter I verses 1 than 8, which clearly presents the great reality that is the price paid by Christ what constitutes the truth of the gospel and the sole legitimate credential of every true preacher; Paul, an apostle (not from men nor through man, but through Jesus Christ and God the Father who raised Him from the dead), and all the brethren who are with me, to the churches of Galatia: Grace to you and peace from God the Father and our Lord Jesus Christ, who gave Himself for our sins, that He might deliver us from this present evil age, according to the will of our God and Father, to whom be glory forever and ever. Amen.  I marvel that you are turning away so soon from Him who called you in the grace of Christ, to a different gospel, which is not another; but there are some who trouble you and want to pervert the gospel of Christ.  But even if we, or an angel from heaven, preach any other gospel to you than what we have preached to you, let him be accursed (Galatians 1:1-8).

Notice the way Paul in his commentaries uses the gospel—that Christ paid for our sins (verse 4)—as a starting point, and from here—he continues to declare that any preacher (even himself or an angel from heaven) that does not speak in accordance to this fundamental truth does not speak in the name of God and that he must be condemned (rejected).  In other words, that message must not be accepted for it is not a preaching of truth.  Therefore, any preacher who does not preach the truth of the gospel (the representative acts of Christ in history) is a false messenger.

There is a prophecy in the Bible that speaks about the False Prophet, which this description calls (False Prophet) clearly present as a false religious movement that does not speak in the name of God and that works deceptively by performing false miracles.  This religious movement is a follow-up of the First Beast of Revelations 13 and it is known in history as the Second Beast.  In other articles we have proved that Rome fulfills the description of the First Beast, and now we can assure you that Pentecostalism fulfills the description given for the Second Beast.  Let us now give a closer look to such religious denomination and let us match their description with those mentioned on Revelations 13.  About this False Prophet or Second Beast it is written, “Then I saw another beast coming up out of the earth, and he had two horns like a lamb and spoke like a dragon. And he exercises all the authority of the first beast in his presence, and causes the earth and those who dwell in it to worship the first beast, who’s deadly wound was healed. He performs great signs, so that he even makes fire come down from heaven on the earth in the sight of men.  And he deceives those who dwell on the earth by those signs which he was granted to do in the sight of the beast, telling those who dwell on the earth to make an image to the beast who was wounded by the sword and lived (Revelations 13:11-14).

It is quite evident that the Second Beast disguises itself as Christian for it looks like a Lamb (a symbol of Christ) but it just a mere appearance for it speaks like a dragon.  If we do our research in the Bible to see how the dragon speaks we must read on Matthew 4 when Satan (the dragon) tempted or Lord Jesus; “Then Jesus said to him, “Away with you,Satan! For it is written, ‘You shall worship the Lord your God, and Him only you shall serve” (Matthew 4:5-10).

Notice the way the dragon speaks with incomplete sentences and taking biblical words out of their true context.  This is the way Pentecostalism preaches.  Pentecostal preachers are known by speaking with loud voices deforming the words.  There is no doubt that they seems Christian in their outer appearance, dressing well carrying a Bible under their arms (a Bible they cannot and do not wish to understand) pretending to appear before everyone’s eyes as Christian but when they speak they cut the train of thought with incomplete passages giving clear evidence of being those described on Revelations 13.

As an additional fact, they also fulfill this prophecy by their performance of so-called miracles—better said, deceitful pseudo-miracles—which are evidence of an incompetent and limited power.  A few examples of the so called miracles are to claim to be able to “see” through and artificial eyeball, gold and silver tooth fillings, hair growth, and such.  However, the true biblical miracles were extraordinary events such as raising the dead, giving back man blind from birth, healing the paraplegic, which are clear evidence of a superior and complete power.  No doubts about it, we are correct in our position.  Let us look back to Revelations 13 which also declares that it even makes fire fall from the sky.  Fire is also a biblical symbol of the Holy Spirit.  In Acts chapter 2 tongues resembling fire appeared when the Holy Spirit came.  It is evident the pretension of the False Prophet and its deceiving miracles and the already mentioned False Prophet of Revelations 20:10.

Besides of all of this description, Pentecostalism does not preach the Gospel of our Lord Jesus Christ but a strange form of salvation through the intervention of a strange spirit as we will continue to prove in the article titled “The false spirit that lurks within the Pentecostal circles is a circus that shows off by making people fall back and even causing injuries, speaks incoherent and unintelligible and appearing as a violent force that instead of bringing peace and calmness brings chaos and disorder.

The Reasons for the Conflict

Rome : The Greatest Money-Changers of History