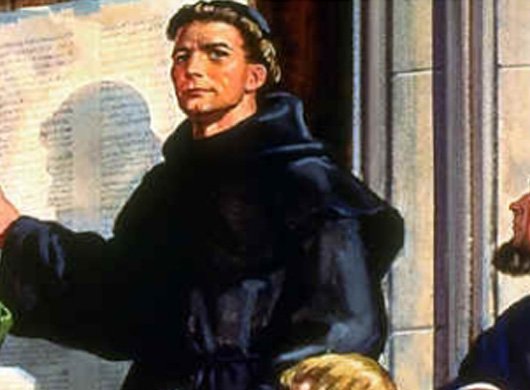 In Memory of Martin Luther

In the memory of the noble struggle of our predecessors, the well-known liberators of the Roman oppression: Saul of better known as Paul; and Martin Luther, also known as “the Warrior of God”; I, Luis J. Laborde, also known as the Prophet for the Year 2000 and successor of the reformers already mentioned, in accordance to my prophetic mission declares the following:

In Revelations 13 John the prophet points out the second beast was granted to signs and miracles in the sight of the first beast (Rome). If we acknowledge the fact that this is a fulfilled prophecy through the Charismatic Movement, originally composed of Catholics attracted to the Pentecostal style; then, we must reach one conclusion: Rome prepared the way so its daughter (Pentecostalism) could achieve the death blow through its Secret Rapture. This cunning historical structure is a desperate move by part of the lord of these churches (Roman and Pentecostal), who is no other than Christ’s former lieutenant, the prince of darkness, the ancient serpent, their leader the devil.

The true movements described on Revelations 14 had never retreated in their main objective. The apostle Paul declared, “For we can do nothing against the truth, but for the truth” (2 Corinthians 13:5); Martin Luther declared at the Diet of Worms, “I cannot betray my own conscience: If yo are not able to prove with the Word that I am wrong; then, I reaffirm My sayings-no matter the outcome. If God protects my life, no one can take it away from me; and if God does not do so, what is it good for?” In these last days Laborde declares, “Truth is above all men; it is neither optional, nor negotiable.”

By the authority the Lord has bestowed on me, I declare the Pope and the Roman Catholic system heretics, and remember this; The end is near, and with the end comes the unavoidable death of this evil system. We expect their counter reaction, or perhaps, the people’s reaction.

The Reason why we have changed our name

The God’s Power of Realization for The Vindication of Luiko of...