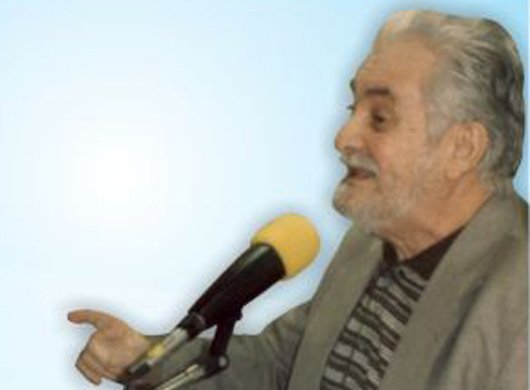 His first Bible lessons were at the Seventh-day Adventist Church, where he also was baptized in 1971.  Within just a couple of months, the Adventist Church authorities were surprised and amazed for his impressively rapid mastery of biblical matters.  For this reason, it did not too long for them to appoint him as an assistant pastor.

However, when he discovered the truth and began preaching by the light of the Scriptures that salvation can only be obtained by faith, and not by works of superogation—as taught by the Adventist Church, he made all efforts to let the Adventist Church authorities understand that they were heading the wrong way for welcoming the teachings of their prophetess Ellen G. White instead of the Bible’s.  This lit the spark for his constant struggle against error.

He took a firm stand to defend earnestly with courage and stoicism the Bible’s truth—just as it was done by his predecessors the Lord Jesus and Paul the apostle during their days of ministry.  He did not hesitate or was baited by the enticing offers made by the Adventist Church administration in order to shut him down.  Being convinced Laborde was not going to fall for it, they cowardly expelled him.

Afterwards, he joined an American evangelical current known in Puerto Rico as “El Despertar” (Spanish version of “The Awakening movement), which proclaimed the Bible’s Gospel.  There he met many good friends.

The “Despertar” movement eventually disbanded, but Laborde continued to preach the Eternal Gospel in public forums, declaring that salvation is only by faith.  He found his own evangelical movement which he named Biblical Brotherhood of laymen in Christ, and began diffusing the Message through many writings and public presentations.

In the 80s, and in virtue of the work of reformation and denouncement the Lord has commanded him to do, he gave a new name to this movement as The Voice of the Reformation.  Under this name it was also known his 10-year long radio program, which made him very well known as a public figure with outstanding biblical knowledge and remarkable ability to uncover and refute doctrinal errors.

In the 90s, the Voice of the Reformation became a popular name in the media when Laborde appeared as special guest on several TV talk shows, forums and interviews.  He also traveled with his preaching to several locations in the United States and South America.

In 1995, Laborde along with some of his followers moved their evangelical headquarters to the town of Utuado in order to set apart and dedicate entirely to preach the Gospel throughout the island of Puerto Rico and beyond.

Since then, he has proclaimed the Word of the Gospel to every corner possible of every single town in Puerto Rico, including through his own TV program —which aired every Sunday afternoon— and his own web site in the Internet and World Wide Web.

He founded his own periodical, Palestra Teológica (Theological Arena, in English), which has been widely distributed throughout the island of Puerto Rico—from town and cities to churches, from the Capitol to the Governor’s Office—.  This is just a small piece of the great effort, hard work and certain vocation of Laborde in order to proclaim the Bible’s Gospel of salvation by faith to every soul possible.  By doing this, he accurately fulfills the mission to carry out a work of reformation, which confirms the movement’s name:  The Voice of the Reformation.

Now, as we get closer to the End Time, the Lord chose to reveal unto him his final mission:  To fulfill and deliver the last word of warning to the whole world and tell them that the End has come to, in this way, prepare the people who will await for the Lord Jesus in His second coming in fulfillment to the prophecy of Revelation 14:9-12.  For this reason, the movement has a new name: The Voice of the Third Angel.

Most recently, just as the Lord Jesus did to the apostles, he bestowed Luis Joaquín Laborde Sala with a new name:  Luiko of Jesus.  This is done in virtue to the fact that Laborde happens to be a pre-existent being, one of God’s sons who came down to this planet to prepare the way for the Second Coming of Christ.

Moreover, the Lord revealed to him that there is an extraordinary miracle about to happen with him that will become the sign that will draw the people’s attention towards his message in order to facilitate the final gathering of the People of God who are scattered in confusion throughout the many religions of the world.

The promised miracle we are making reference to is this:  Luiko is to be taken up to heaven (this event has already occurred!) to acquire a unique and special preparation, and then, to be returned back to earth in a youthful body.

Now, we are patiently waiting for this biblical miracle to happen—for all things concerning the task and miracles about Luiko of Jesus are foretold in Scriptures—.  Remember this:  For God there is nothing impossible.

“After these things I saw another angel coming down from heaven, having great authority, and the earth was illuminated with his glory.” (Revelation 18:1)

“It shall come to pass in that day that the Lord shall set His hand again the second time to recover the remnant of His people […]  He will set up a banner for the nations…” (Isaiah 11:11-12)

In Depth: Interview with Luiko of Jesus

Mission of Luiko of Jesus

Uncovering and Refuting the True Traitors of Society through Religion